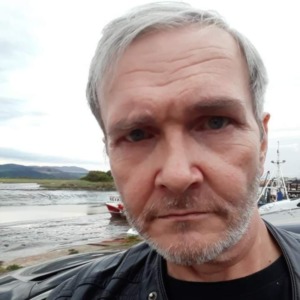 Musician, songwriter and producer Dean Wright, a native of London, currently lives in Newry Northern Ireland where he has been for the last 20 years. Involved in many projects over the years he took his band Dean and Chapter all over Ireland and as far as Scotland until lockdown and circumstances brought an abrupt end to the project. He currently fronts the band Varlight, a two piece electro-pop duo from the border region of Ireland.

Dean has a wide range of experience musically, he was classically trained as a guitarist as a child, was active in the fledgling punk scene in the 70s where he was the last ever DJ at the famous Roxy in Covent Garden. The late 70s/early 80s also saw him in bands such as “Minorities Brain”, “CJ and the Doctor”, “Stonesthrow” and “The Elastic Band”. He produced a string of songs for various record companies in the 80s and formed a guitar led rock band “The V Amps” in the 90s. The 00s saw him experimenting with home studios and the 10s saw Dean and Chapter emerge as well as the launch of his own label DC Music. Now in the 20s Varlight have become his focus as well as this all new radio show!

Deans’ musical taste is varied “anything done well” is what he tells anyone that asks! When not making music, vegan Dean can be found at the gym 3 times a week, playing Xbox or writing, not just songs but short stories, musings and poetry.
Sunday
18:00 - 20:00
LIVE The Listening Lounge